Paddle boarding is such a great water activity to get into. There are many boards out on the market. Some are made for SUP yoga, some are made for SUP racing, some are inflatable, and some are solid. So finding one that gives the best all round flexibility to the recreational paddle border can be challenging. GLIDE Paddle Sports have been kind enough to let us test their O2 Retro 10’6″ SUP. It’s an inflatable paddle board that, once inflated, is as hard as wood. So let’s delve in and see how it shaped up to the test.

So What’s Included In The Glide O2 Retro SUP Package:

As you can see, this SUP has everything you need to get out on the water and weighs only 23lbs (10.4kg) with a massive maximum weight capacity of 400lbs (181kg).

D-rings: 4 D-rings hold the bungee cords to store your bag/drink bottle or food for a day out on the water. The O2 Retro also comes with a further eight D-rings, one at the back, three on each side, and one at the front on the underside of the SUP.

Handles: Three handles – one at the front, one at the back, and one in the middle of the board.

I’ve had inflatable water sports equipment in the past were folding them up after inflation and placing all items in the carry bag is impossible. This is the complete opposite with the GLIDE O2 Retro SUP, everything fits in the bag easily with enough room to throw in a wetsuit.

The Inflation Process And Getting The O2 Retro SUP Ready

What is the recommended inflation PSI for the O2 Retro?

I inflated the SUP to 15 PSI and it was rock solid.

There is no need to inflate the SUP to its rated 25 PSI value.

The included pump has two settings, double-action and single-action.

The double-action setting is used initially. Once the inflation pressure rises to around 6-8 PSI, pumping can become a bit harder. At this point, swapping to single-action pumping will aid in completing the process.

Initially, when pumping, a hissing sound was coming out of the SUP air inlet indicating air was escaping out. However, the SUP still appeared to be inflating, so I continued pumping in the double action pump mode to see what would happen.

At about 7 PSI, the air noise from the SUP air inlet stopped. It appears that once the inflation pressure rises, the connection between the pump nozzle and the air inlet tightens.

The nozzle did come out during the early stages of pumping. Changing the position of the pump relative to the SUP corrected this issue.

After pumping to the recommended 15 PSI, the O2 Retro was rock solid. It was like a plank of wood.

I found that in the latter stages of inflation keeping my back straight and bending my knees in an up and down squatting action allowed me to use my whole body weight to move the pump, giving my arms and back a break. This made the whole process more efficient and quicker.

I inflated the SUP on a few different occasions and it took an average of 8-10 min to reach 15 PSI from empty.

After completing inflation, I always place my ear close to the air inlet valve to check for any leaks.

When doing so after the first inflation, I heard a very faint sound of air coming out of the inlet.

I used the wrench tool provided and turned it very, very slightly in the closed clockwise direction as labeled on the tool.

This seemed to make the situation worse, so I reversed the action and then turned the wrench tool in the open direction (anticlockwise) ever so slightly.

The problem was solved, and no more air escaped out. This issues did not occur on subsequent inflations.

If you’re not interested in doing a pre-workout before going out on the water, Glide Paddle Sports do offer an electric pump as an accessory purchase, so you don’t have to manually inflate your SUP.

Guru TIP: When you get any board for the first time. Do a dry run at home. Check your board out and test its features and accessories. This will allow you to figure things out in an environment where you don’t feel rushed.

The paddle, which can dismantle into three pieces for storage, has an adjustable length so you can adjust it to your height.

I found the paddle light and easy to use. It appeared to be strong and should last a long time if cared for properly.

The fin set up on the O2 Retro iSUP

The SUP I received came with a removable screw-in fin that used a thumbscrew.

Assembling the fin was easy. I would recommend placing the screw and nut in the repair kit container when not in use to ensure it stays safe.

My thoughts on the GLIDE O2 Retro’s included seat

The O2 Retro comes with a seat so you can convert it into a SUP-YAK. The seat also includes a storage compartment at the back which can be very useful to store extra supplies.

The seat assembly was slightly awkward, but once on, it was comfortable to sit in. You can collapse it without changing the strap lengths, by pushing it backwards.

How Did The GLIDE O2 Retro iSUP Perform Out On The Water?

How easy was the Retro O2 Paddle Board to maneuver while standing up?

Maneuvering the GLIDE O2 Retro was easy. It tracked reasonably straight and moved through the water very easily. In fact, concentrating on the items that needed reviewing, I had ventured out quite far but getting back to shore was no challenge.

The O2 Retro was very stable, and thus, staying balanced was very easy.

This alone would be make it perfect SUP for a beginner. If you didn’t feel confident standing on your first outing, sitting on your knees is another option. From this position, falling off would be difficult due to the board’s stability.

Standing on the board while the seat is up isn’t the best option if you wear the leash (leave the leash on, it’s a lifesaver). The leash did get in the way with the seat up. However, there were no issues standing up with the seat collapsed.

How Well did the O2 Retro fair as a SUP-YAK?

The leash can get caught in the seat when sitting down as your feet are now in a different position. This did not hinder any paddling action. The board was very easy to maneuver while sitting down and felt extremely stable.

Falling into the water

This will happen at some stage or another. I made sure I fell in every direction possible to test how easy it was to get back on this iSUP (highly important if you are a beginner in the sport).

Getting back on was extremely easy. As mentioned earlier, this iSUP, when properly inflated, is completely solid, so there is no flex when you attempt to get back on. The handles and D-rings will aid you in the process, and I could pull myself onto the SUP with ease. The leash remained attached to me and due to its length, it caused no hindrance.

Guru Tip: Practice falling and getting back on the SUP. This is an essential skill. Ensure you haven’t overexerted yourself to the point that you cannot pull yourself back up on the paddle board if you fall off.

The leash is very comfortable to wear as the ankle strap is padded and secures to your leg with a strong velcro strap. The leash is long enough to allow easy movement when carrying the sup out of the water and remained on and secure even when pulled on. Due to its length of 10′ (3m), it doesn’t hinder your movement and ability to get back on the SUP if you fall in the water.

Overwhelmingly, most buyers are delighted with the O2 Retro and its build quality and design.

Buyers like the flexibility it offers as an all round SUP and its whopping carrying capacity of 400lbs (181kg) . It is often mentioned that paddlers take their pets and kids onboard.

Some buyers do mention that the included fiberglass paddle feels cheap.

There are a few comments regarding the quality and robustness of the included pump.

It is worth mentioning that even buyers that have issues with some included accessories of the O2 Retro SUP, are more than delighted with the actual board itself.

Comparable Boards To The O2 Retro

The Atoll 11’0″ Inflatable SUP has similar features to the O2 Retro. It’s a little bit longer at 11 feet and narrower at 32 inches, but it does come with a tri-fin setup. However the O2 Retro has a full length EVA deck pad where as the Atoll iSUP only has the deck pad on part of the SUP. Atoll offers the seat as an optional extra rather than an inclusion.

Our Verdict On The GLIDE O2 Retro SUP

The O2 Retro fits the bill as an all-round SUP that is suitable for most water outings. Some paddle boarders may have specific requirements that this SUP may not deliver on. However, for most folks looking to purchase an inflatable paddle board for ocean, lake, or river outings as well as the occasional yoga routine, the GLIDE O2 Retro ticks all the boxes. Plus, it’s super easy to store when not in use.

Red Paddle Co has designed the Snapper SUP to be the perfect paddleboard for young paddlers! We take a detailed look CHECK IT OUT

Paddle Board VS Kayak: Which is Best for Fishing & Touring? Pros, Cons & Speed Test 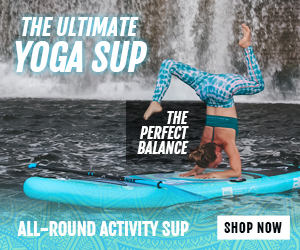